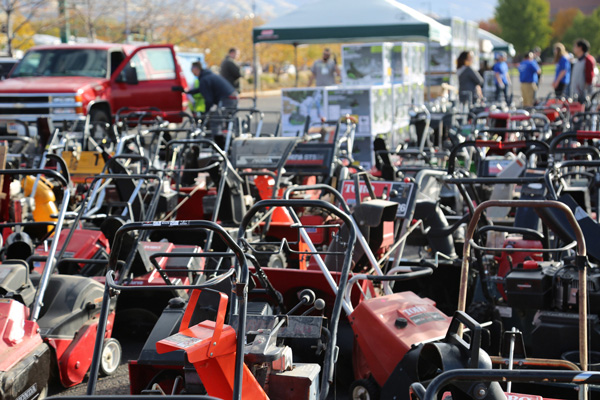 Scientists at DAQ estimate that operating a snow blower for one hour emits as much pollution as driving a new passenger car 287 miles.

The Utah Department of Environmental Quality’s (DEQ) Division of Air Quality (DAQ) manages several voluntary emissions-reductions programs and this fall’s snow blower exchange in the Uinta Basin was just one of them. These programs are one way state residents can make small changes that collectively make a big difference.

This fall, our attention was focused on the wintertime ozone problem in the Uinta Basin. The Uinta Basin deals with air quality issues stemming from a combination of natural and unnatural factors. The geography of the region, being essentially a bowl with a rim of mountains, can fill up with pollution given off by human activities such as oil and gas mining.

The production of oil and gas in the Uinta Basin contributes about 76 percent of the nitrous oxides (NOx) and 98 percent of volatile organic compounds (VOCs). When NOx and VOCs break apart in sunlight, they reform as ozone—an oxidant that can damage human health. Although NOx and VOCs occur naturally, humans contribute to the majority of these emissions in the atmosphere. 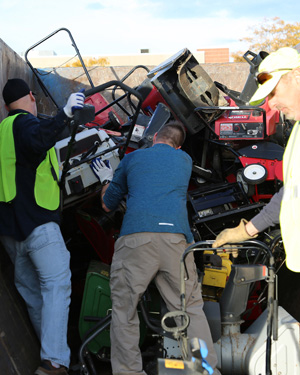 During the snow blower exchange, old machines are recycled and swapped out for less-polluting electric blowers.

You’ve likely heard of the ozone layer and the detriment of the hole in the ozone layer, and you may be thinking, “wait, I thought ozone was a good thing.” And, if we were way up in the stratosphere high above Earth, you would be right. The ozone layer is a beneficial phenomenon protecting us from being overexposed to harmful ultraviolet (UV) radiation since the ozone layer is a dense, thick, yet permeable barrier. But down here, at ground level, it presents a health issue. Breathing ozone has been described as being similar to getting a sunburn on your lungs. Exercising when levels of ozone are elevated is particularly harmful because you breathe more deeply. Breathing ozone is harmful to younger and older generations as well as those who may suffer from heart and lung conditions. Ozone makes existing health problems worse and can create adverse health effects and respiratory problems in entire populations, including healthy folks.

Since ozone typically forms when NOx and VOCs are in the presence of heat, the most common time to experience high and dangerous levels of ozone at ground level is during the summer. The Uinta Basin, contrarily, is a relatively rare circumstance where a region regularly experiences elevated levels of ozone pollution during the winter months when sunlight is present, but heat generally is not.

There are things we can do to keep us living in a healthy environment. You can protect yourself by not exercising when ozone levels are high, but also by taking preventative measures to keep ozone levels at bay so that we don’t have to limit doing our favorite outdoor activities like running or biking. We can lower the levels of ozone by reducing the amounts of ozone precursors we produce. We know that ozone precursors are NOx and VOCs, and NOx and VOCs are produced in large amounts by personal cars, trucks, lawn mowers, snow blowers, and so on. We know that NOx is commonly released through the combustion of cars, trucks, airplanes, and other liquid-fueled engines. Wood burning also creates these emissions. Gasoline-powered engines found in traditional snow blowers are common culprits for emitting VOCs and NOx. Scientists at DAQ estimate that operating a snow blower for one hour emits as much pollution as driving a new passenger car 287 miles.

For more information about the 2019 Uinta Basin Snow Blower Exchange Event and to be on our mailing list for future snow blower exchanges, visit snowblower.utah.gov. Some may say I’m a Utah-transplant. I am originally from the Midwest where I grew up in a self-sustaining family with strong environmental values. Since then, I have found myself all over the map understanding how people all around the world develop and sustain relationships with our planet. Before moving to Utah, I became a graduate of the University of Dundee in Scotland where I completed a postgraduate program in Sustainability and Climate Change. These days, though, you’ll find me on a mountain bike or in a tent somewhere in the mountains.