Residents who have questions or are interested in hearing more about the cleanup at the Peck Rock Landfill are invited to drop by for an informal open house. The DEQ Project Manager and toxicologist will be in attendance, along with representatives from Utah County Health and the Saratoga Fire Department.

Corrective measures taken on the landfill site are complete. DEQ plan to coordinate an available and informal walk-in open house where interested residents can come by within a given time frame and ask questions or raise any issues they feel still remain. We will post that information here and announce it in several other venues, once a date has been firmly set. In the mean time, we wanted to provide an update.

The smoldering material has been excavated. The owners brought in many truck loads of clay to compact the surface. The clay layer is a few feet deep, compacted, and has been worked-up the sides. Ordinary soil was then brought in and packed on top of the clay. Packing the side walls sealed-off any potential rain water from running down the wall face. The site now looks bowl-shaped.

During the original assessment, EPA mentioned the possibility of returning to do further air sampling. The EPA, however, has those plans currently on hold unless further issues are raised either by the data validation results or by the neighborhood. Originally, the additional sampling was envisioned once work was complete to address any concerns about lingering problems. However, by the time the EPA Project Manager left town, they were 99.9% sure there weren’t any. Remaining work has been on-going and monitored by the DEQ. Now that the work is completed, EPA is “as near 100% certain that no further sampling is needed. During regular site inspections by the DEQ, there has been nothing in the way of sight or smell that has indicated a rekindling of burning construction garbage from the landfill pit.

The plan to pursue no further air sampling is based on a couple of things. When the “event” was on-going, local and federal authorities not only smelled the strong odor coming from the pit, but detected organic levels in the air monitoring (the Area RAEs) and saw hot spots using thermal imaging. As the Peck Rock owners did their work, the smells dissipated, and detections on the Area RAEs dropped to zero, and the thermal imaging also decreased to nothing. By the end of a 36-hour round-the-clock, real-time air monitoring campaign ending on Tuesday, August 18th, there were almost all “zero readings” across the board on the EPA’s air monitoring instruments; no odors, no smells, and no hot spots. If there were any readings above zero, they were miniscule and insignificant. In the EPA’s judgment, whatever was smoldering had gone out. The continued site monitoring by the DEQ since then has only reinforced the decision of considering no further air monitoring. The EPA points out that it is hard to justify the expense when there are no signs of an active problem. However, should a need be determined, the EPA could re-mobilize to the site and sample.

EPA and DEQ are still awaiting data validation results. This admittedly is a cumbersome and bureaucratic process. Once a request is made and data submitted, it is out of EPA’s hands. By design, this validation process must be independent so as to be impartial.) As a reminder, this analysis is being done to confirm-or-not-that the problem has indeed been taken care of.

Landfill owners covered and sealed the areas of concern with clay and soil. DEQ walk-throughs at the site, about twice a week, have not revealed signs or smells indicating a rekindling of the burning. Covering and packing the excavated areas appears to have resolved the problem.

DEQ is now awaiting EPA laboratory data validation from air sample results taken in August. This is a process to verify that proper quality control and procedures were followed. Once the lab data validation results are received, an availability session will be scheduled at Saratoga Springs City Hall so that residents may ask questions.

The Peck Rock landfill continues to make progress as workers cover the pit with soil. A crew of 4-to-5 people works on it daily. The Department of Environmental Quality is monitoring its progress, and continues to work with Peck Rock owners to ensure that there is good soil coverage and proper compaction.

Truck crews continue to haul in soil and dump it along the west rock wall. The rock face (west wall) is now mostly covered with soil. The pit is now taking on more of a “bowl-shaped” look. Crews working in the pit are pushing up soil along the side wall edges and packing it in—mainly so that future rain doesn’t run straight down the rock face and work its way down into the buried trash.

The Peck Rock landfill continues to bring soil to add more cover over the area that was emitting odors. The pit is almost half the depth it was before excavation of the smoldering material began. Heavy machinery continues to work and compact new soil on the bottom of the pit and upwards along the side walls to seal off any potential air pockets or water routes that could find their way into the buried construction debris. The site continues to receive oversight from the Utah Department of Environmental Quality personnel who stay in touch with the landfill owners almost daily.

The results of residential air sampling reliably demonstrate that the chemical compounds in the air around the homes are below levels of concern, based on the preliminary data. Scientists, deploying “real time” monitors that run all day, did not detect any chemical compounds of concern. Scientists may revisit the site and conduct more air sampling after the cleanup is complete.

Meanwhile, the landfill operator has applied several feet of packed clay to the bottom of the pit. Soil is being trucked in to distribute over the packed clay, which will act as a buffer to keep the clay moist underneath. The Utah Department of Environmental Quality continues to oversee the operations.

Scientists will need several days to complete quality assurance tests on the results of residential sampling, but a preliminary review of data found nothing that would indicate an immediate health risk to area residents. Results are being closely reviewed and will be ready for public release later this week.

The situation has improved as landfill workers continue to snuff out any “hot spots,” which has helped minimize the odors that officials say are more a nuisance than a health risk. The clean-up operation has moved from excavating smoldering material to compacting the remaining trash and applying a soil cover and a several-foot thick clay cap. The move will help ensure that the debris piles will not reignite in the future.

The exact cause and make-up of the odors reported by residents may not be determined. However, Scott Everett, toxicologist with the Department of Environmental Quality (DEQ), explained that just because an odor is present, it doesn’t necessarily mean the odor has harmful levels of chemicals associated with it. Environmental scientists have been testing for the 25-30 hazardous chemicals which are common when wood and plastics burn. Real time (meaning 24-hour a day, ongoing) monitoring at strategic locations at the landfill is continuing. No hazardous chemicals are being registered by the monitors. If anything changes, the monitors will immediately pick it up.

Over the weekend, a second hot spot was detected in the southwest area of the landfill. This has been removed. Thermal imaging is being used to detect other potential problem areas. Nothing is being found.

Once all clean-up activities are completed, another round of sampling will be done to evaluate the site.

Preliminary Results In; Additional Air Quality Samples Being Taken on Homes Nearby

EPA will begin neighborhood air sampling this evening to determine if the elevated chemical levels measured at the landfill cell are making their way over to the residences. The push will be to do ambient (outdoor) air monitoring in the areas where the smells appear to be the most concentrated and then move further down hill, as necessary. Samples will also be taken in several homes where residents have reported impacts. 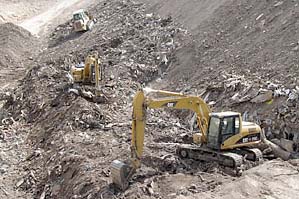 Air sampling will be ongoing for 12-24 hours at each monitoring location. Results should be available early next week. EPA, DEQ, and Utah County Health Department will evaluate the results and decide if any additional actions, or more air monitoring, are needed.

Currently, debris from the suspected “hot spot” generating the odors is being spread out into several layers, with each layer covered with clean dirt before another layer is spread out. The goal is to minimize the odors and keep oxygen out of the debris pile so it will not reignite in the future. 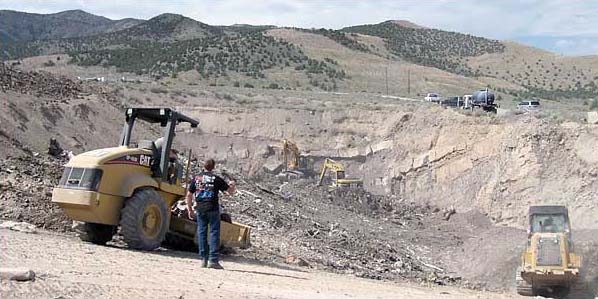 DEQ, Utah County Health Department, and EPA will meet tomorrow at the site to assess the situation and determine when and where to conduct air sampling in the Saratoga Hills neighborhood that is downhill from landfill.

Preliminary results from tests conducted by the Environmental Protection Agency (EPA) showed elevated levels of eight chemicals at a landfill cell where buried material is smoldering. These include:

These are chemicals common when wood and plastics burn.

State toxicologists are looking at the results and comparing them to several health based, risk screening models used for air quality and Superfund work. Their preliminary impression is that the numbers do not pose an immediate health risk to residents in the area. Air quality samples at several residences will be taken to ensure that is the case and if not, to determine what additional steps are needed.

Scott Everett, Utah Department of Environmental Quality (DEQ) Toxicologist, explained that his main concern is always where people are living in relation to where the high samples are measured. In this case, the greatest concern would have been if homes were directly on top of the spot where the highest concentrations were found. Homes are at least 100 yards away, and once these particular chemicals hit the atmosphere, they quickly disperse within a very short distance. For this reason, Everett is not recommending emergency steps. However, he recognizes citizen concerns and does not dismiss the accounts of those who experience symptoms they attribute to the landfill odors. For this reason, DEQ, Utah County Health, and EPA have agreed to further tests to measure any concentrations in the residential area.

Parents who are concerned about possible impacts to their children’s health may take the precaution of keeping windows closed. Be aware that swamp coolers pull in outside air, so the smells may be pulled into the house.

Meanwhile, the landfill owner continues to remove the smoldering debris in the pit. Crews first concentrated on the perimeter of the pit where the odor was strongest before moving onto the center area of the pit. The odors have been described as a burning plastic smell from chemicals that can irritate the eyes and throat.

On August 1, DEQ received a complaint about an odor that appeared to be coming from the vicinity of the Peck Rock landfill. The Utah Division of Waste Management and Radiation Control (DWMRC) responded because it issues a permit to Peck Rock to operate a construction waste landfill. DEQ has been coordinating with EPA, Utah County Health Department, Saratoga Springs Fire Department, and the landfill’s owner to mitigate the source of the odor.

On August 4, officials determined the odor was coming from cracks in the perimeter of the construction landfill pit. The odor appears to be stronger in the late evening and early morning hours, depending on wind conditions. People impacted are advised to take precautions by closing windows and shutting off swamp coolers. Sensitive people, such as asthmatics, are advised to stay indoors when the odor is most troublesome.