Located on the banks of the Weber River, the Swift Building complex in Ogden was recently demolished after DERR and EPA dealt with decades of abandoned waste. 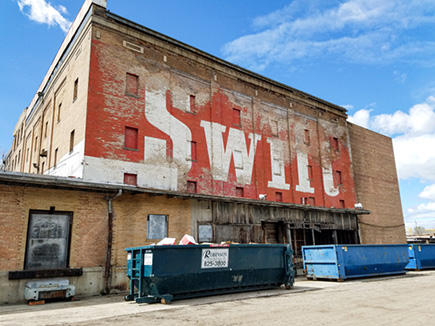 The City of Ogden will address soil and groundwater contamination at the site under an interim remediation plan.

Industrial or commercial sites where future use is affected by environmental contamination can present serious hurdles for communities looking to revitalize forgotten sections of town. Tools like the Voluntary Cleanup Program, Targeted Brownfields Assessments, and the EPA-administered Superfund program are just a few ways the Utah Department of Environmental Quality’s (DEQ) Division of Environmental Response and Remediation (DERR) safeguards Utah’s land and helps bring properties back into economic use.

One such forgotten spot is the Ogden Swift Building. For more than 100 years, the Ogden Swift Building sat on the banks of the Weber River in Ogden and was used extensively for a host of business. The facility was formerly a meatpacking plant. After that, the building was sold and used to store surplus military items. It was also leased out to a chemical manufacturer who went bankrupt.

Unfortunately, the historical uses of the property left a lasting legacy of environmental impacts and literally thousands and thousands of abandoned containers, including flammables, corrosives, water reactives and other dangerous chemicals inside the buildings. The EPA was contacted and worked closely with the Department to address the property. The EPA removal action was successfully completed late last year with the removal of approximately 98,275 containers.

Along the way, Ogden City also applied to the Department’s Voluntary Cleanup Program (VCP) administered by the DERR.  With the building safely emptied of hazardous waste, preparations for demolition were made. DERR worked with Ogden City and the Division of Air Quality to address the remaining asbestos-containing material inside the buildings and to develop a materials management plan to manage additional waste material encountered during demolition.

In May, the Ogden Swift Building was razed to make space for a 125,000-square-foot aerospace manufacturing facility and hundreds of new jobs. Over the summer, contractors removed the demolition debris from the site.

Ogden City is now working VCP to implement an interim Remedial Action Plan (RAP) to address likely sources of contamination suspected under the foundations of the former buildings.  Known contaminants include PCBs (polychlorinated biphenyls) petroleum products and solvents.  The City will also be working with the DERR Underground Storage Tank Program to address soil and groundwater contamination from an old tank that was encountered during initial demolition work.

Implementation of the interim RAP started September 9 with the removal of the old foundation from the former Administration Building.  This is the first step in an overall sitewide assessment and remediation effort that will help revitalize the property and protect the public and environment.