EnergySolutions Responses to Interrogatories Raised with Version 1.4 of the DU PA Model

Review of the DU PA will continue but at a lower priority. DEQ comments on Version 1.4 of the model will be delayed beyond April 30th

EnergySolutions submitted the following documents to DEQ in response to issues raised in the April 2015 Draft Safety Evaluation Report (SER). The documents provide general comments on the content and scope of the SER, specific technical comments and edits to the SER, and Version 1.4 of the DU PA Clive modeling report.

Public information meetings will be held today and tomorrow in Tooele and Salt Lake City. PDF versions of the eight posters that will be available at the meetings are provided below for reference. Meetings at both locations will be held from 5:00 to 8:00 pm.

DEQ has granted EnergySolutions’ request to delay public comment on the Safety Evaluation Report (SER) to give the company more time to to address issues that were not resolved in the report and provide the public with an opportunity to comment on a fuller record containing this additional information. The public comment period for the SER will be placed on hold for a limited time.

For the purposes of the SER, “resolved” means that a determination has been made that there is sufficient information to demonstrate that this requirement will be met.

The agency will hold two public informational meetings on the current SER on May 6, 2015, and May 7, 2015, to provide the public with the opportunity to ask questions and discuss SER findings with DEQ staff and representatives from its outside consultant, SC&A.

DEQ will schedule another public comment period at a later date. The agency will hold public hearings during this comment period to accept oral comments. Additional public information meetings may be held, as appropriate, at the time of any final proposal.

EnergySolutions has requested that the public comment period for the Depleted Uranium Performance Assessment (DU PA) be placed on hold until the company has an opportunity to address questions raised in the Safety Evaluation Report (SER).

The Director of the Division of Radiation Control is requesting public comment on the Safety Evaluation Report (SER) for the Depleted Uranium Performance Assessment (DUPA).

DEQ Response To Final Submittals and Changes to Begin of Public Comment Period.

EnergySolutions submitted the following supplementary documents and studies in response to DEQ’s requests for additional information.

EnergySolution is asking for a three month extension request in order to complete a dune soil layer gradation study.

These following three files were updated (table results and the executive summary) because of the supplemental deep time analysis.

Revision 2 of the Report, “Utah Low-Level Radioactive Waste Disposal License (RML UT2300249) Condition 35 Compliance Report,” which includes responses to the Round 3 Interrogatories (as Appendix E) and responses to all other prior Interrogatories. As an aid to the reviewers, attached are redline-strikeout versions of Appendix A and those appendices that have changed since they were last submitted. This is the final submittal from EnergySolutions before the public comment period starts in September 2014.

Round 3 Interrogatories of the Depleted Uranium Performance Assessment. These Interrogatories pertain mostly to a critique regarding version 1.2 of the model (see June 6, 2014).

References mentioned in the Interrogatories and the reports provided below, including the Clive DU PA Model Version 1.2.

EnergySolutions’ responses to the Round 2 Interrogatories.

EnergySolutions revision of the initial design of its Federal Cell to include an evapotranspirative cover equivalent to that currently under review for the Class A West Embankment.

As a result, EnergySolutions is re-submitting Appendix A of its Condition 35 Compliance Report, which now considers the impacts of the evapotranspiration cover in version 1.2 of the depleted uranium Performance Assessment GoldSim model.

Round 2 Interrogatories of the Depleted Uranium Performance Assessment

EnergySolutions responses without modeling for the evapotranspiration cover.

Round 1 Interrogatories of the Depleted Uranium Performance Assessment Based on the scope of the interrogatories, probabilistic model is in order.

EnergySolutions response to the DEQ completeness review comments. The facility responded to all comments deemed deficient regarding the completeness of the compliance report. EnergySolutions proposes to respond to the regulatory and technical inadequacies of the modeling portion of the performance assessment in the Round 1 interrogatory phase.

DEQ hired an outside contractor, S. Cohen & Associates (SC&A) from Virginia to evaluate this Performance Assessment to determine if it is adequate and addresses the necessary requirements. The results of this review and subsequent responses by EnergySolutions will be used by the Director of DRC to make a determination whether or not to issue a license amendment allowing significant quantities of concentrated DU to be disposed at the EnergySolutions facility.

EnergySolutions submits a Performance Assessment (PA) for the disposal of significant quantities of concentrated depleted uranium (DU) at their facility in Clive, Utah. The PA is a site-specific evaluation to determine whether there is reasonable assurance of compliance with regulatory performance objectives and in identifying critical data, facility design, and modeling procedures, to determine if DU can be safely managed at the EnergySolutions facility.

This document is divided into its basic components for easier download and review. The content descriptions were prepared by DEQ staff as a brief guide for the user.

A performance assessment (PA) is a quantitative, technical evaluation to determine whether a disposal facility can meet federal and state performance standards to protect public health and safety. It considers:

EnergySolutions requested a license amendment to allow it to accept large quantities of depleted uranium for disposal at its facility. The Nuclear Regulatory Commission (NRC) recommended site-specific performance assessments for depleted uranium to assess whether disposal of this unique waste stream would meet public health and safety requirements. Based on direction from the Radiation Control Board, the Division of Radiation Control (DRC) initiated rulemaking to specifically address this issue. On April 10, 2010, the Radiation Control Board approved the Depleted Uranium Performance Assessment Technical Analysis rule. This rule requires a quantitative compliance period for DU of a minimum of 10,000 years, with additional qualitative simulations for the period of peak radiation dose occurring at approximately 2 1⁄2 million years.

In August 2013, DRC hired an outside contractor from Virginia, S. Cohen & Associates (SC&A), to evaluate the PA for adequacy. DRC sent a Completeness Review (CR) to Energy Solutions in October 2013 and asked the facility to: 1) respond to agency comments and 2) supply any missing or additional information for the PA. DRC reviewed the PA for technical accuracy and regulatory compliance, submitted division issues or concerns to the facility in a series of three Interrogatories. EnergySolutions revised the initial design of the DU disposal cell and resubmitted the portion of the modeling report related to cell performance, as well as an updated compliance report, in June and July of 2014. 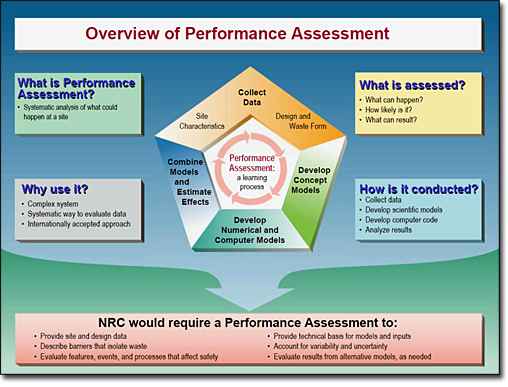 Presentations are available from a June 1, 2011 Stakeholder Forum briefing.