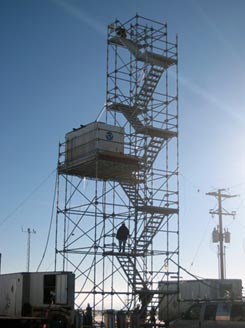 Results from UBOS 2013 showed that the primary chemical drivers of winter ozone formation in the Uinta Basin differ greatly from summer ozone formation in urban areas, but left unanswered a key question about the importance of a particular radical source, nitrous acid (HONO).

Measurements made during UBOS 2014 confirmed the unique nature of winter ozone formation mechanisms. By comparing results from five different HONO measurement techniques and making HONO measurements over a wider range of elevations within the polluted atmospheric boundary layer, researchers showed that HONO does not appear to be a major source of radicals during the winter episodes.

Reducing uncertainties in the radical source chemistry will allow the Division of Air Quality to recommend control strategies with greater confidence. Preliminary modeling indicated that Basin ozone air chemistry will respond to volatile organic compound (VOC) controls. In 2014, scientists also looked at whether HONO would respond to NOx controls.

New “box model” simulations of ozone formation chemistry based on data collected at the Horsepool study site confirmed earlier analyses indicating that ozone formation at this location is sensitive to VOC reductions (i.e., VOC reductions would result in ozone reductions). These results also suggest that NOx reductions, either by themselves or in conjunction with VOC reductions, would lead to ozone reductions at Horse Pool. While providing an important reference point, these box model results do not take into account spatial variations in emissions and the mixing of emissions from different sources, and thus they do not provide a sufficiently-robust assessment of the expected impact of basin-wide VOC or NOx emission reductions on ozone levels to allow formulation of a comprehensive regulatory control strategy. Nevertheless, this result provides support for ongoing VOC reduction measures and is an important contribution to the overall “weight of evidence” guiding the control strategy design.

Other key research included an evaluation of oil and gas field sources of fugitive carbonyl emissions, especially formaldehyde, which has been shown to be important in ozone formation in the Basin. Accurate knowledge of formaldehyde sources is critical for development of cost-effective mitigation strategies.

Results from the 2014 measurements confirmed that formaldehyde and other aldehydes are the dominant radical sources. These compounds are both directly released from various emission sources and form in the atmosphere from directly emitted VOCs such as those contained in oil and raw natural gas. Aromatic VOCs, including toluene and xylene, while less abundant than other VOC species in the Basin, are also particularly important sources of radicals.

Participants in the 2014 study proposed the following recommendations and path forward: