Particulate matter (PM) is a complex mixture of small, solid particles and liquid droplets in the air. PM10 is particulate matter that is 10 microns (μm) or less in diameter. It is a mixture of materials that can include soot, metals, salt, and dust. Major sources include:

The health-based, National Ambient Air Quality Standards (NAAQS) for PM pollution specify the maximum amount of PM present in outdoor air. The Environmental Protection Agency (EPA) developed different health-based NAAQS for PM10 and PM2.5, in part because the coarser PM10 can be filtered out in the nose and throat, while PM2.5 is able to bypass this filtration system and penetrate deeply into the lungs, resulting in more serious health effects. PM concentration is measured in micrograms per cubic meter, or µg/m3.

In 1987, the EPA set new air-quality standards for PM10 of 150µg/m3 over a 24-hour period and an average of 50 µg/m3 annually. EPA revoked the annual PM10 standard in 2006 because the agency couldn’t show any adverse impact to human health.

Nonattainment designation is determined by the EPA when an area or areas within a state persistently exceed the National Ambient Air Quality Standards.

Including nonattainment area boundaries and the townships and ranges of the legal descriptions. For PM10, most high values tend to occur during wintertime inversions. In the summertime, high wind events can also lead to unusually high PM10 values. Trends are somewhat difficult to evaluate because weather plays such a large role in the data collected from year-to-year. This is why the standard is evaluated over a three-year period.

The fluctuations in this chart reflect the variability produced by meteorology and high-wind events.

This reflects control measures implemented through the PM10 SIP between 1992-1994. Controls were directed at reducing high concentrations typically recorded during wintertime inversions. Much of the PM10 that was controlled was secondary PM and would have been measured as PM2.5. 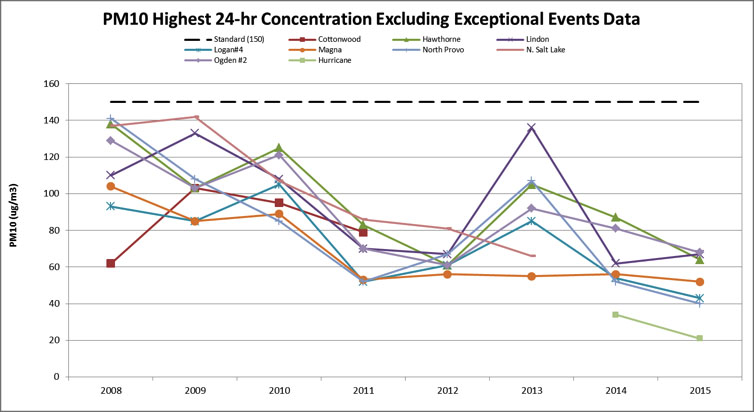