A colorless gaseous alkaline compound that is very soluble in water, has a characteristic pungent odour, is lighter than air, and is formed as a result of the decomposition of most nitrogenous organic material. Information Source ..

Pollutants for which National Ambient Air Quality Standards (NAAQS) have been established. Criteria pollutants addressed in this report are: PM10, PM2.5, SO2, NOx, VOCs and CO. The term “criteria pollutants” originated from the fact that standards are based on information published in air quality criteria documents.

An accounting of all air pollution emissions and associated data from sources within the inventory area and over a specific time interval.

Chemicals or chemical classes widely considered toxic, and are either known or suspected to cause cancer or other adverse health effects. DAQ currently inventories these HAPs (34 KB).

Lead is used in the manufacture of batteries, metal products, and ammunition. Exposure to lead can occur from breathing contaminated air in or near workplaces that process lead or lead materials, as well as from incidentally ingesting dust or paint chips in houses with lead-based paint. Lead can cause effects on the blood, as well as the nervous, immune, renal and cardiovascular systems. Early childhood and prenatal exposures are associated with slowed cognitive development, learning deficits and other effects. Exposure to high amounts of lead can cause gastrointestinal symptoms, severely damage the brain and kidneys, and may cause reproductive effects. Large doses of some lead compounds have caused cancer in lab animals. Information Source …

Allowable concentrations of air pollutants in the ambient air specified by the Federal Government.

Chemicals formed in high-temperature combustion processes. The substance is toxic by itself and can react to form ozone or PM10 in the form of nitrates. Nitrogen dioxide (NO 2) is brownish red gas with a biting odor. It is highly irritating in high concentrations. Nitrogen dioxide is always accompanied by nitric oxide (NO).

Any stationary source of pollution for which the Administrator of EPA adopted a national standard that is published in 40 CFR Part 60, these categories of sources were established because it was determined the category contributed significantly to air pollution which may reasonably be anticipated to endanger public health or welfare. 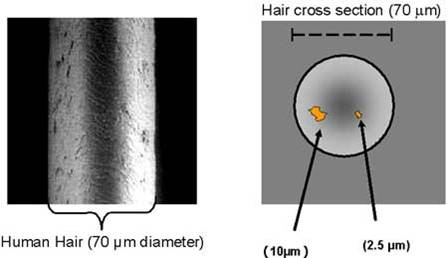 Particulate matter (PM),” also known as particle pollution, is a complex mixture of extremely small dust and soot particles. Particle pollution is divided into two categories, “PM 10” and “PM 2.5.”  PM 10 is matter less than 10 micrometers in diameter. That would be about one-seventh the width of a strand of human hair. PM 2.5 is even smaller—measuring 2.5 micrometers or less.

Chemicals that are not emitted directly from sources into the atmosphere, but formed through complex chemical reactions of precursor species. Ozone, sulfates and nitrates (the last two being types of PM 2.5) are examples of secondary air pollutants.

An invisible gas with a pungent odor. At low concentrations, this gas can often be tasted before smelled. The major source of sulfur oxides is the combustion of sulfur-containing fuels, primarily coal and fuel oil. Sulfur dioxide is a toxic substance that can impair breathing.