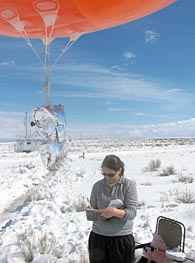 During the winter of 2010-2011, the Division of Air Quality (DAQ) partnered with Utah State University Energy Dynamics Lab to study elevated winter ozone levels in the Uinta Basin. The study was done to understand the extent and behavior of winter ozone development in the Basin.

Ten portable air monitors were placed throughout the Basin and neighboring oil and gas fields to measure ozone levels. Five additional monitors were operated by partner agencies and located in other areas of the Basin.

Findings in the 2010-2011 Uinta Basin Winter Ozone and Air Quality Study Final Report (5 MB) showed that areas near Ouray and the central Basin had the highest ozone values, while ozone concentrations decreased with distance and increased elevation.

Results from the study suggested that ozone concentrations observed during wintertime inversion periods are a function of local topography, meteorology, and the abundance of ozone precursors rather mid- or long-range ozone transport.