The Division of Water Quality (DWQ) is seeking over $145,000 in penalties and reimbursements from the North Utah County Water Conservancy District (NUCWCD) for the release of metal-laden sediment from Tibble Fork Dam into the American Fork River on August 22, 2016.

Under the Settlement Agreement (305 KB), NUCWCD has agreed to the following:

The District also agreed to a monitoring plan (760 KB) and remediation plan (191 KB) for the river to pre-spill conditions based on recorded conditions above the Tibble Fork Dam on the North Fork of the American Fork River.

The settlement addresses requirements outlined in the Notice of Violation and Compliance Order (542 KB) issued to NUCWCD on September 28, 2016, for discharging pollutants, degrading water quality beyond state standards, and failing to notify DEQ. The penalty is set under state statute and based on the incident’s impact on public health and the environment.

The North Utah County Water Conservancy District (NUCWCD) filed a Request for Agency Action (2.3 MB) before the Department of Environmental Quality to ask for a review of the Notice of Violation/Compliance Order (NOV/CO) issued by DEQ on September 28, 2016.

The NUCWCD asks that the NOV/CO be modified to account for facts it provides in the Request and actions it took to remedy environmental issues associated with the Tibble Fork Reservoir drainage and sediment release.

The NOV also cited the NUCWCD for failure to meet Army Corps of Engineers and DWQ permit conditions and failure to report the incident to DWQ immediately.

Conditions that the NUCWCD must meet under the Compliance Order (CO) include:

Results from samples collected September 3,5, and 6, 2016, for turbidity and total suspended solids (TSS) show the river downstream from Tibble Fork Dam recovering to the point that dam operators are no longer in violation of turbidity and TSS standards.

The latest sediment data from the samples taken by the Park Service are consistent with Division of Water Quality samples.

The Division of Water Quality (DWQ) continues to monitor conditions in the American Fork River with the assistance of the National Park Service, the U.S. Forest Service, and the Utah County Health Department (UCHD).

The construction contractor has completed the bypass channel designed to prevent the contaminated sediments in the reservoir from eroding into the river. The North Fork of the American Fork River is now flowing through this channel. Water quality in the river has improved noticeably since then the completion of the bypass channel, with the bottom of the creek becoming visible again in most locations.

Water samples have been taken at least every other day from all locations on the river since the sediment release.

The latest samples were analyzed for total suspended solids (TSS), a measurement of solid material suspended (not dissolved) in the water, and turbidity, a measure of water clarity. The analysis showed the suspended solids in the river dropped to their lowest levels on September 1, 2016. While the turbidity of the water continues to show overall improvement, it fluctuates from day to day. Samples taken over the Labor Day weekend are currently being analyzed, and data will be available before the weekend.

The UCHD collected samples from Highland Glen Reservoir, Heritage Park, and Manila Reservoir on August 31, 2016, in response to concerns about the quality of irrigation water used downstream. Analysis of total and dissolved metals concentrations in samples taken at these locations confirmed that metals levels in the water do not exceed the EPA screening values for recreational, agricultural, or aquatic-life uses.

The Division of Water Quality has analyzed data from samples that were collected below Tibble Fork Reservoir on August 24, 2016. Metals concentrations are very similar to those collected on August 23, 2016.

The Division of Water Quality, in partnership with the U.S. Forest Service (USFS), collected water quality and sediment samples today. Data will be reported to the public as soon as it is available. The creek level was significantly lower today compared to yesterday, and the water-quality sonde (measurement device) installed yesterday had to be moved to a deeper area of the river.

The Division of Water Quality (DWQ) was notified on August 23, 2016, of a large release of sediment from Tibble Fork Reservoir into the North Fork American Fork River. DWQ collected water and sediment samples on August 23, 2016, to determine the water-quality impacts from the release. DWQ analyzed the water chemistry and sediment samples for a broad range of heavy metals and screened the findings against recreational, agricultural, and aquatic-life criteria.

Advisories and Use Determinations

Based on DWQ data analyses, state and local officials have made the following use determinations and issued the following advisories:

Division of Water Quality (DWQ) scientists have been sampling the river daily since August 23, 2016, and will continue to sample throughout the weekend. DWQ is also deploying sondes (measuring instruments) above and below the reservoir to monitor the water quality continuously and document any changes in temperature, turbidity, pH, and other criteria.

The dam owners, along with the consulting engineers and contractor, are currently installing a canal that bypasses the contaminated sediment in the lakebed. This project is progressing quickly and should be in place by the weekend. When completed, it is expected this will significantly reduce if not eliminate the discharge of potentially contaminated sediments from the lakebed. The dam restoration project itself is expected to be completed December 2016.

Water and sediment samples were collected on August 23, 2016, at four locations: 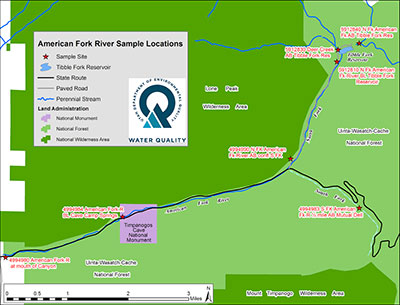 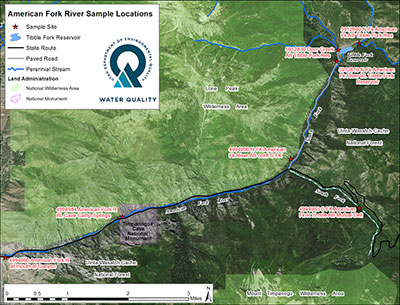 DWQ data analyses from water and sediment samples from these locations, along with data taken by the National Park Service at Timpanogos National Monument the previous day, revealed the following: