The Utah Division of Water Quality received a request from Jordan Valley for a Utah Pollution Discharge Elimination System (UPDES) permit to discharge byproduct water via a 21 mile, 16 inch diameter pipeline running from the Jordan Valley facility in West Jordan to the mouth of Gilbert Bay along the south shore of the Great Salt Lake (see Discharge Location Map (148 KB)) and excess shallow groundwater used in the treatment process into the Jordan River.

This project is a part of a larger groundwater cleanup under a Natural Resource Damage Claim (NRDC) filed in 1986 by the State of Utah against Kennecott Utah Copper. The claim was made for damages to two deep water aquifers from historic mining activities. The Jordan Valley Southwest Groundwater Treatment Plant was constructed under the NRDC settlement agreement to treat contaminated water located in the deep water aquifer in Zone B in the southwestern Salt Lake Valley. Kennecott Utah Copper constructed a similar reverse osmosis facility to clean up contaminated water in the deep groundwater in Zone A.

The cleanup project makes use of reverse osmosis to remove total dissolved solids (salts) from the groundwater. High pressure forces contaminated water through a semi-permeable membrane. The water flows through the membrane while salts, such as sodium chloride, calcium carbonate, and sulfate, are separated from the water moving through the membrane and collected in the byproduct waste stream.

Treatment will result in three streams from the treatment plant:

UPDES permits are granted to facilities that demonstrate they can comply with the requirements of the Clean Water Act and the Utah Water Quality Act. UPDES permits include effluent limits and permit conditions that insure the beneficial uses of the receiving water are protected.

Concerns about impacts from selenium and mercury in the byproduct discharge were raised during public comments several years ago. Since then, DWQ has established numeric criteria for selenium in the Great Salt Lake and conducted exhaustive research on potential adverse impacts from byproduct discharge on the lake biota. The proposed permit includes effluent limits and stringent monitoring requirements that address these concerns.

In 2004, the State of Utah Natural Resource Damages Trustee (NRD Trustee), Kennecott Utah Copper (Kennecott), and the Jordan Valley Water Conservancy District (Jordan Valley) entered into an agreement for a joint water treatment project to clean up groundwater contaminated by historic mining operations in the southwestern Salt Lake Valley (4.8 MB). Kennecott agreed to construct and operate a reverse osmosis treatment plant for the Zone A sulfate plume and partially fund construction of a second reverse osmosis plant to treat water in the Zone B plume. This second water treatment plant would be owned and operated by Jordan Valley Water and would treat contaminated deep aquifer groundwater in Zone B as well as shallow groundwater unaffected by mining activities. 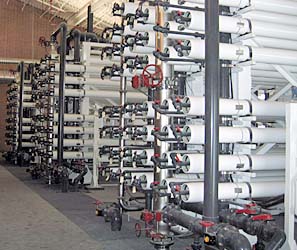 Jordan Valley requested and received approval in 2003 to discharge byproduct from the reverse osmosis treatment of deep aquifer groundwater into the Jordan River. The permit was later withdrawn by Jordan Valley with a request to study discharge alternatives and to allow for additional time for Great Salt Lake water quality studies.

In the interim, the Jordan River was classified as impaired based on Utah Water Quality Standards for total dissolved solids (TDS) and could no longer be considered as a discharge recipient for waters that exceed a TDS concentration of 1,200 micrograms per liter (mg/L). During this time, the Division of Water Quality (DWQ) completed the Great Salt Lake Selenium Study and established a tissue-based numeric standard for selenium for the Great Salt Lake in 2008.

In 2010, Jordan Valley submitted a Utah Pollution Discharge Elimination System (UPDES) permit application (433 KB) which requested approval to discharge byproduct water into Gilbert Bay of the Great Salt Lake and untreated shallow groundwater to the Jordan River. DWQ hosted a public information meeting on the permit application on March 22, 2010. The 60 day public comment period for the draft permit ran from December 1, 2010 to February 1, 2011, with a public hearing on the permit held on January 4, 2011. The typical public comment period for UPDES permits is 30 days, but DWQ determined that the complexity of the permit and the high public interest warranted a longer comment period.

DWQ received an unprecedented number of comments, totaling 150 pages, from 50 individuals and organizations on the draft permit. On May 9, 2012, a 31-page Comment Response Summary (433 KB) was sent to those who commented on the 2010 draft. After a lengthy review and analysis of the comments submitted, DWQ determined it needed to make substantive changes to the 2010 draft permit and Statement of Basis. The permit has since been revised to include supporting information (1.9 MB) for the determination of the effluent limits in the byproduct discharge and additional monitoring requirements in the transitional waters of Gilbert Bay for selenium and mercury. The permit includes a reopener provision if new information resulting from effluent monitoring and study data indicates that these effluent limits need to be revised.

A public hearing and information meeting is scheduled for June 17, 2013 at 6:00 p.m. in the Utah Department of Environmental Quality Board Room located on the first floor of the Multi-Agency State Office Building at 195 North 1950 West in Salt Lake City.

Given the complexity of this permit and the high public interest, the Division has extended the public comment period from the required 30 days to 45 days. The public hearing is an opportunity for the public to provide comments for the record.

Written comments may be directed to:

After considering public comment, the Executive Secretary of the Utah Water Quality Board may execute, revise, or abandon the proposed permit.

August 2010 UPDES Permit Application for Southwest Groundwater Treatment Plant
(Due to its large size, the application is broken into smaller file sizes)

Gettips about providing public comment and to see the a schedule of public hearings.